This tutorial explains how to compile a QCAD plugin.

QCAD plugins can be used to extend QCAD with functionality implemented in C or C++.

All QCAD plugins must be directly or indirectly derived from QObject and the abstract base class RPluginInterface.

For our first, minimalistic example plugin, we add empty or minimalistic implementations for most methods of RPluginInterface directly to the header file. This initial structure of the header file can be copied to get a first working plugin that can be loaded into QCAD.

For method getPluginInfo, we add a simple implementation to the cpp file for the benefit of seeing something in the about dialog of QCAD.

To compile our plugin, we also need a Qt project file that can be turned into a Makefile with Qt qmake.

The include on line 3 should point to the file shared.pri of the QCAD source code installation (e.g. qcad/shared.pri). As DESTDIR, you may want to choose the plugins folder of a working QCAD installation, so the plugin is compiled in the right place from where it can also be loaded by QCAD.

To compile the plugin in debug mode run:

Obviously, the plugin won't do anything useful yet, but you should be able to see your plugin in the QCAD about dialog: 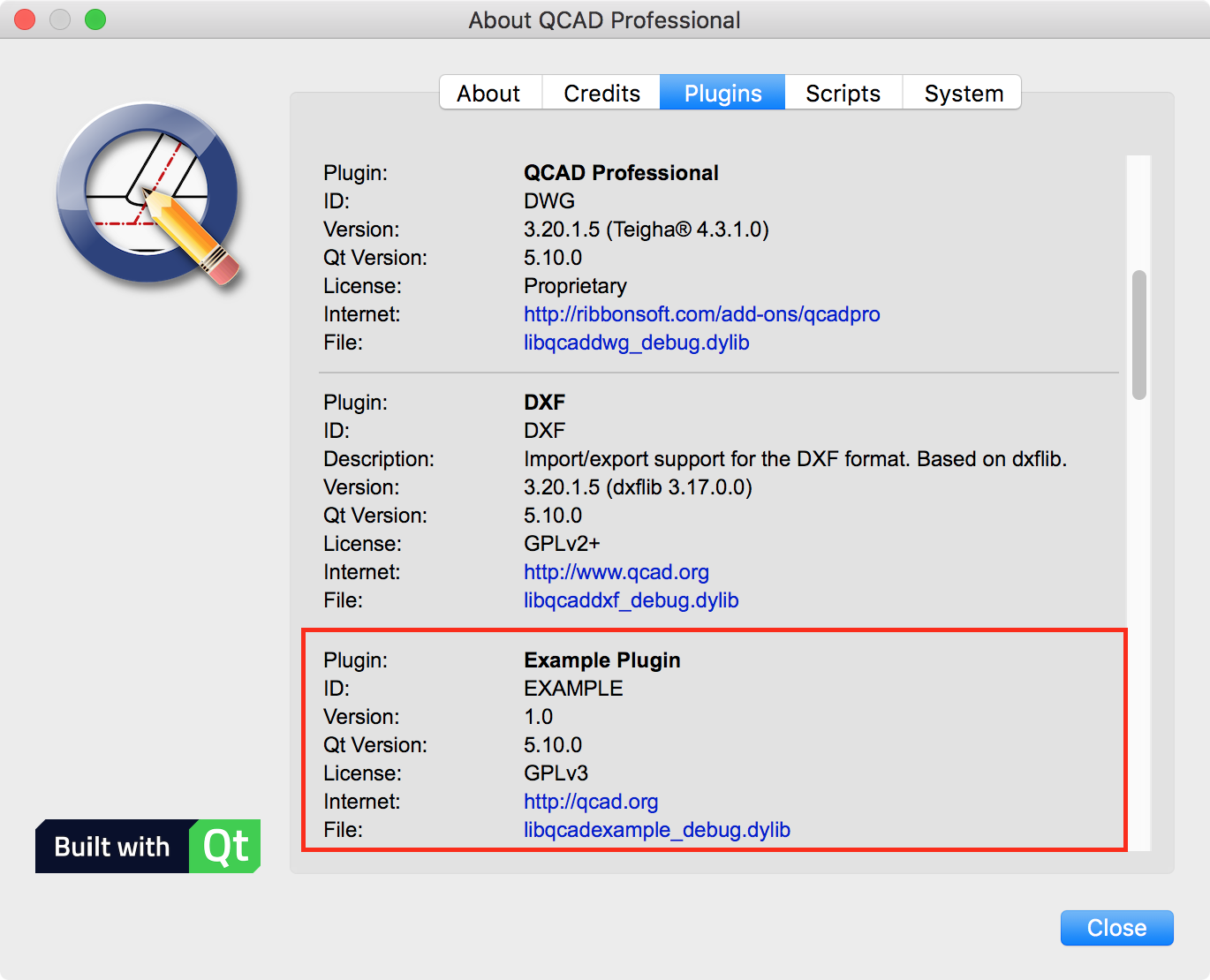 If you cannot see your plugin, please check for errors on in the terminal while starting QCAD. You might also see an error message in the about dialog.

Compiling Scripts as Resources into a Plugin

QCAD plugins may be used to compile a collection of scripts and other resources (ui files, icons, etc.) into a plugin. This has the advantage that the code of multiple ECMAScript files can be bundled inside a single, compiled binary file. Plugins tend to load faster than individual files from disk and take up less disk space.

Let's assume there's a folder scripts/MyTool with a file MyTool.js which contains a QCAD tool, implemented in ECMAScript. The tool adds itself at the top of the Misc menu and outputs "Hello World" when triggered.

To compile this script tool into our C++ plugin, we need to create a Qt resource file which points qmake to the file we want to compile into the plugin:

We also need to add the qrc file to the project file (exampleplugin.pro) by adding the following line:

After editing the file exampleplugin.pro, run qmake and make again and load the plugin. There should now be a menu entry "MyTool" at the top of the Misc menu in QCAD.

You can find the complete source code for this example plugin at:

We use cookies on our website. Some of them are essential for the operation of the site, while others help us to improve this site and the user experience (tracking cookies). You can decide for yourself whether you want to allow cookies or not. Please note that if you reject them, you may not be able to use all the functionalities of the site.